Back on the bridge, Jennifer has a question: „Where is the ship actually going?“ The captain explains that they are coming from Rotterdam. „Our port of destination is Istanbul. We will arrive in about six days.“ Corrie and Jennifer look at each other in horror. Not to Turkey again!

The next day, the Medicane has slowly left for Greece, Jennifer finds a message on Facebook from the Australian Sea Rescue (Amsa). The photo shows Wilson Street shortly after the rescue. It is the picture taken by a crew member at 11:43 the previous day. The Sea Rescue thanks the Maltese colleagues for the coordination of the rescue operation. Jennifer bursts into tears. 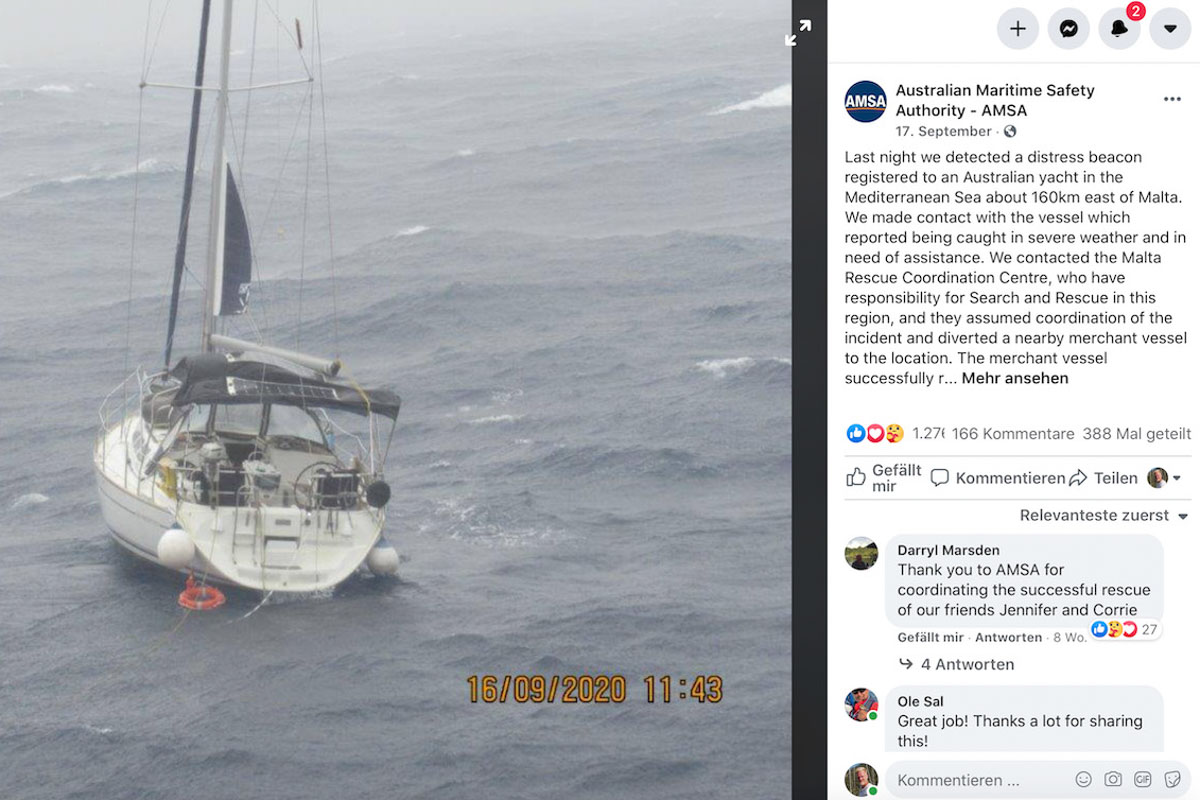 Not because of the memories of the dramatic rescue, nor out of grief for her boat. It is the nasty comments under the picture. Besides many encouraging contributions, the typical know-it-alls and sofa sailors also have their say. „I don’t see any waves there“ or „If you can’t handle it, you have no business on the water“. Jennifer briefly considers answering, explaining that there are no waves to be seen because two cargo ships are lying in front of the yacht as breakwaters. But then she puts away her cell phone and avoids Facebook for the next few weeks. 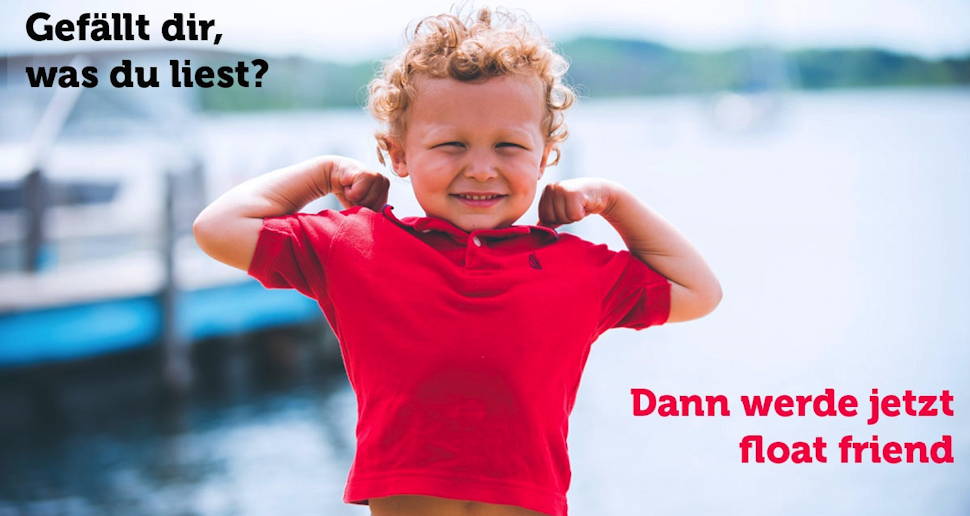 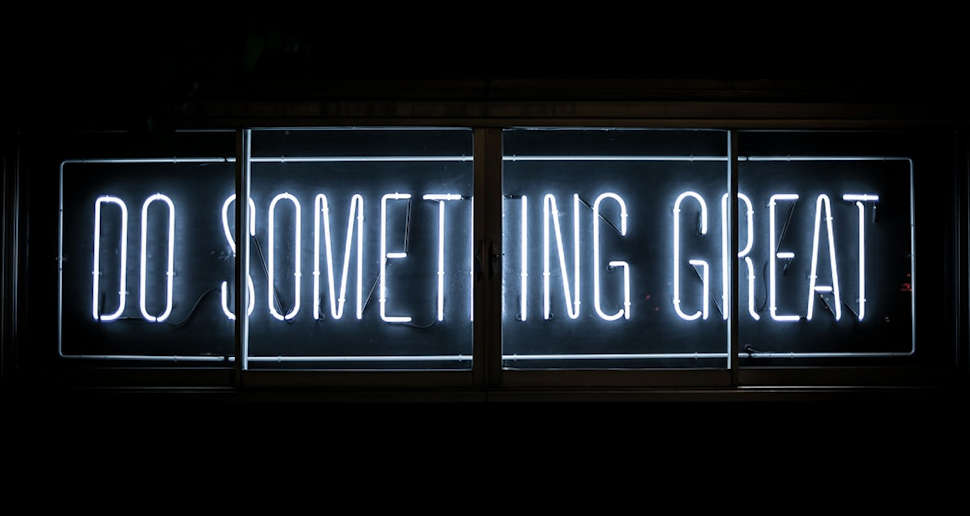 The trip to Istanbul almost resembles a cruise. The two are lovingly cared for by the crew, drink tea with the officers in the morning and afternoon, and can go to the bridge whenever they want. The shipping company does not charge them anything. Sea rescue is a matter of honor. Even before they reach Istanbul, Wilson Street seems to have sunk. The sea rescue informs the daughter in Australia that the epirb has triggered. Either the boat was washed by a wave, or the boat sank. „During the rescue operation, the hull was severely damaged,“ says Corrie. He even hopes that the boat sank and poses no danger to other ships. During the exceptional circumstances of the storm he had no chance to open the sea cocks. 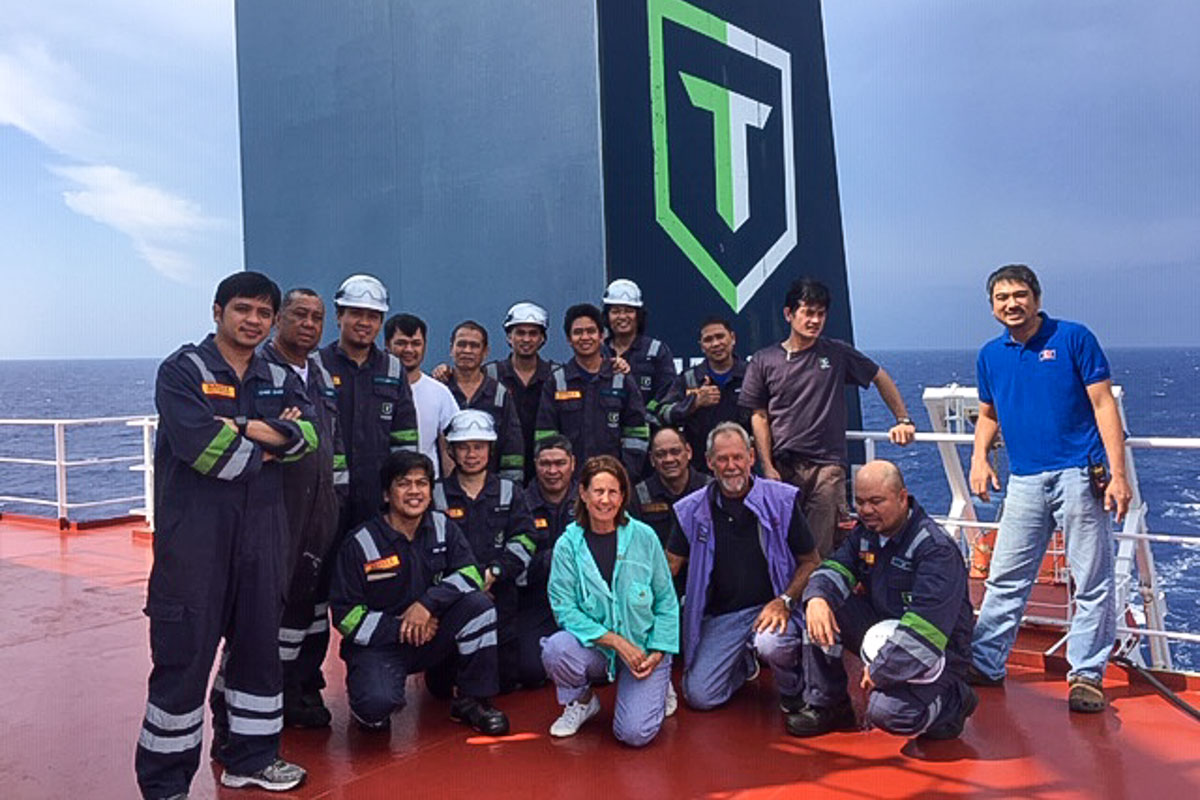 In Istanbul, the two are met by the Australian consulate, which takes care of the paperwork and offers to arrange for a flight. „We would like to go to Malta,“ Corrie says immediately. What they are supposed to do there, he doesn’t know either. „It was like an inner impulse to end the trip,“ he says today. While still in Istanbul, the two of them stock up on the essentials.

They don’t have more than the clothes they wore when they were rescued. And of course the T-shirts with the tanker logo. The next day they fly to Malta. There they meet some Australian sailors with whom they sail back to Sicily. Was it strange to be on the sea again? Jennifer and Corrie look irritated. „No, why?“

They have contacted the manufacturer of the life raft. They cannot explain why the island failed, but considering the pictures promised compensation. Also the weather service has reacted. Corrie actually only wanted to ask if he could suspend the subscription for several months. He got his money back because the forecast had been inaccurate. The insurance pays for the loss of the boat. Even if the amount does not quite correspond to the value of the boat.

Meanwhile Jennifer and Corrie are back in Turkey. They do not want to fly back to Australia. Rather they are looking for a new boat to continue their journey. Whether Malta is back on the sailing plan, they do not know yet. However they are hopeful that Murphy went down with the boat.

Two months after the incident off Malta, Jennifer receives a message via Facebook. From Libya. A man inquires about the well-being of the crew. A Libyan fisherman would have found the damaged Wilson Street on the sea and towed it into a harbor. The man seems to be an officer of the coast guard.

Jennifer and Corrie cannot believe their eyes. On the attached photos, Wilson Street lies peacefully in a harbor, somewhere in Libya. Without mast, anchor and chain have disappeared, the fittings are half torn off. The bimini with solar panels is missing, as well as all ropes and the chart plotter. The railing is partly torn off. The hull is damaged. It is possible that Wilson Street has capsized. Or it serves as a spare parts warehouse for Libyan sailors. 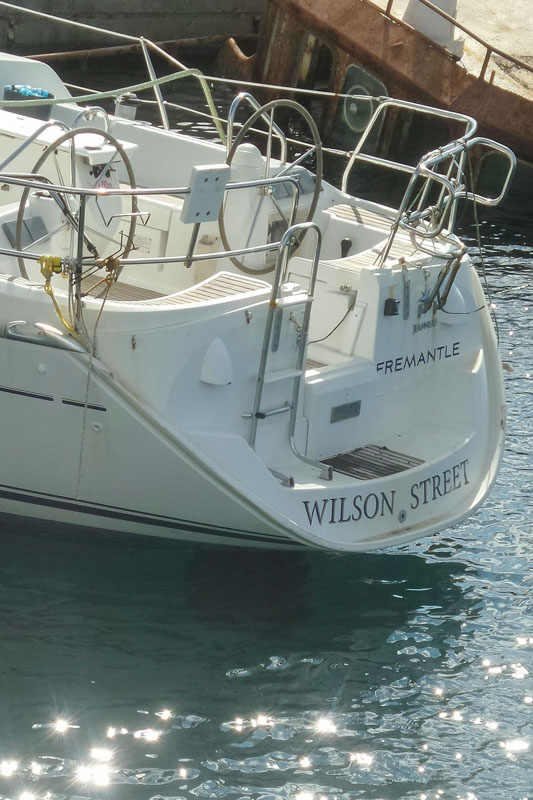 The remains of the Wilson Street … © Private 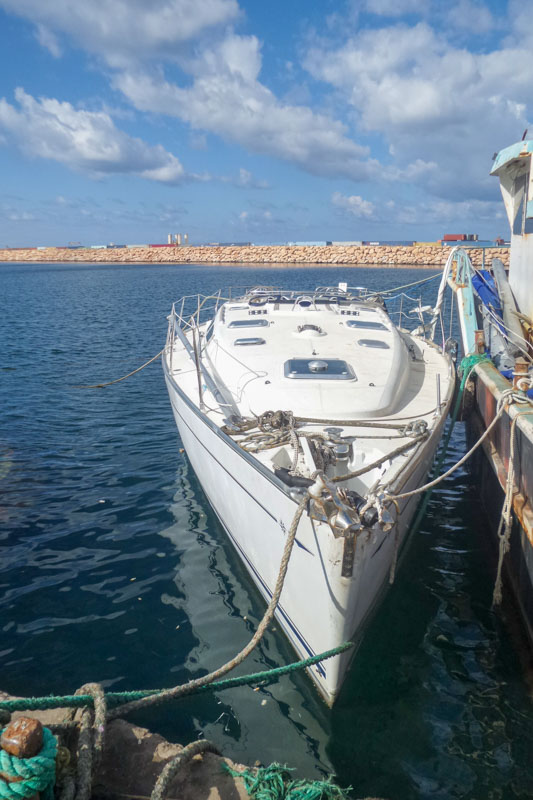 Personal valuables are no longer on board, the message says. In the pictures that were taken below deck, everything looks spotless. Someone must have cleaned up. In the background of one photo, Jennifer even discovers cleaning products. And she is surprised. In the salon hangs a picture that Jennifer painted in Turkey but never put on the wall. It was well stowed away. Someone must have found it and put it in the salon. It seems that someone lives on Wilson Street. Murphy???

Anyway, the insurance company seems happy. „That’s great“, writes one of the staff members when Jennifer and Corrie inform them about the mail from Libya. „So, what do you want to do now?“ Corrie is shocked. „I am definitely not going to a war zone.“ It seems that the last chapter of Wilson Street has not yet been written. The nightmare continues. 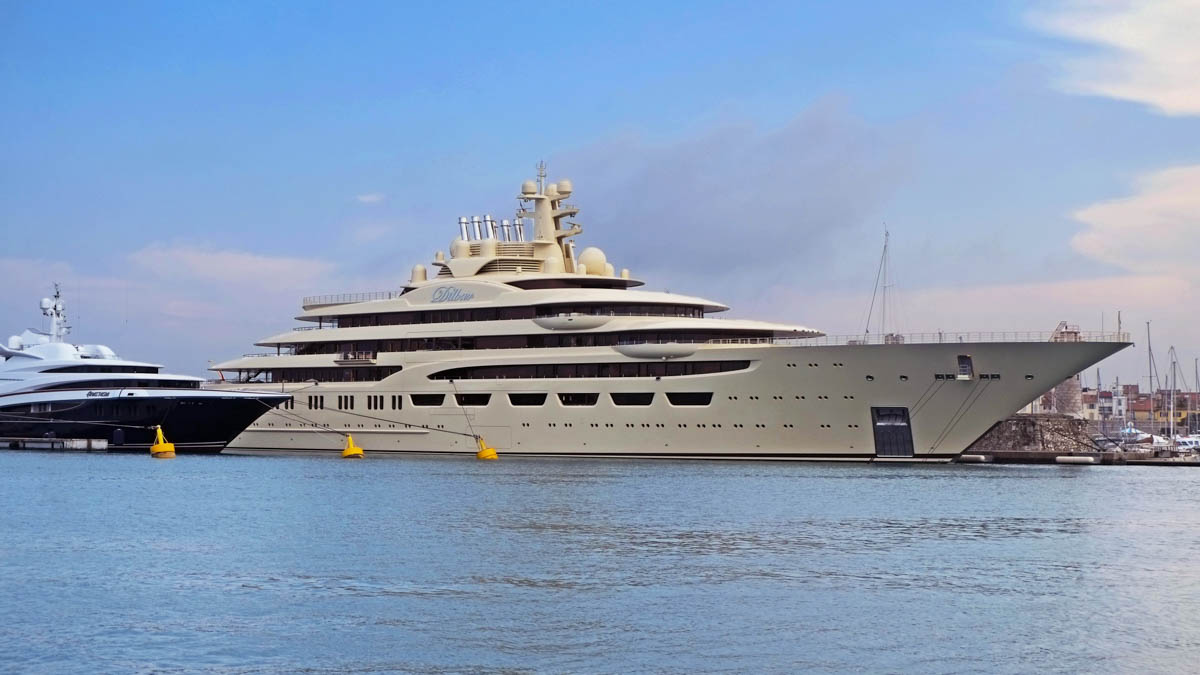 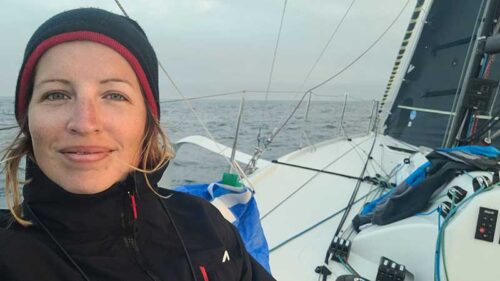 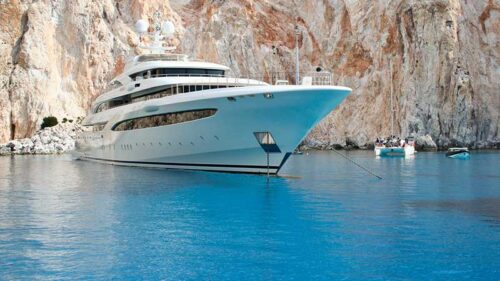 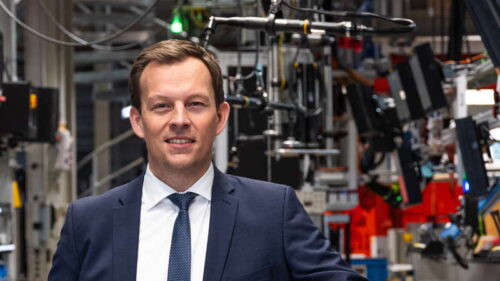